Today I went to Montgomery Bell State Park to a Predators to Prey exhibit they had. It was quite interesting and the animals that were featured were gorgeous.

The Corn Snake is a nonpoisonous snake that is indigenous to corn fields. This is a type of rat snake and kills its prey with constriction.

The Corn Snake is often a beginner pet to snake and reptile lovers.

Are you interested in Corn Snakes? Check out this link. Do remember if you choose to home a Corn Snake, you need to check into your local government's laws to see if possession is legal.

The next creature that was shared with us, was the Caiman. Our presenter stressed that this fella is not the friendly type. While this guy was rather small at only about 20 inches, we were told he could do damage if he got ahold of a finger.

Caimans are from Central and South America. They can get up to about five foot in length.

For more information about this cousin to the alligator, check out this link.

The next animal that we all fell in love with was the prairie dog. We were given a lot of information about him and his family. While we were told that he is closely related to the squirrel, he lives underground and doesn't eat trees.

In the United States, prairie dogs are very beneficial to the eco-system but they were treated like pests and many were destroyed. They are indigenous to the Western United States where there are four known 'cities'.

Fr more information on the Prairie Dog, check out this link.

The treat of the exhibit was the Eurasian Eagle Owl. One of the largest birds on the planet and a magnificent specimen. With a wingspan of five-foot, this particular owl is not quite full grown.

Approximately twenty months old, he weighs right about five pounds. His wings are silent and he is a ninja of the skies. Look out small animals, when this fella gets hungry he is coming to get you.

As his name suggests, he is indigenous to Eurasia.

For more information about the Eurasian Eagle Owl, please check out this link.


Last but not least, we met a lovely teenager that could very well live right outside here in the South. He is known as the Bobcat. During the exhibit this fella was rather lazy and wanted to be carried around.

He looks rather large, and weighing in at 22 pounds he is the size of a medium breed dog. (We laughed because our Neko-chan is 20 pounds but he is not quite as large.)

The Bobcat is known for being elusive and nocturnal (most cats are nocturnal). He is named for his bobbed tail that is really longer than a typical bob. They are carnivores and eat small animals. This is a good reminder to not leave your small pets out and unprotected.

Evidence of Bobcats shows that they cover the majority of North America and are not picky about the environment.

For more information of this great cat, please visit this link.

I know I had fun getting to know a little more about these animals and reptiles, I hope you did too!
Posted by Faith No comments:
Email ThisBlogThis!Share to TwitterShare to FacebookShare to Pinterest
Labels: Animals, FTJcreates, Photography, pictures, pleasure, SQUEEE, State Park, Tennessee, TNPhotographer

I will be committing one Saturday a month to photography. This means I will be doing a monthly photo-shoot as long as there are at least 2-3 people that sign up.

The sessions will be 30 minutes and I will provide you with 15-20 digital prints on CD along with consent to print form. The cost is $50 and is to be paid in order to book the session. (i.e. If you want 2pm on Jan. 25, I need to receive payment by the 20th or arrangements need to be discussed.)

I will only be able to take a certain number of sessions each day, so if there is a specific event coming up please check with me. For January the date will be the 25th with payment due on the 20th. I know this is short notice, but it is the day I have available. Sessions will be from 11am - 4pm. 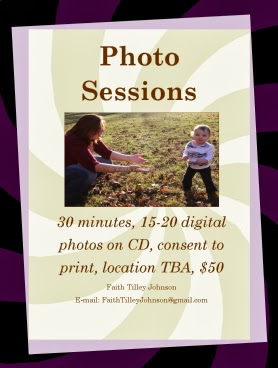 This would be a great date for Valentine photos. Location is to be determined based on those that sign up and weather. I will have a set location by January 20th.

January won't work for you? I have February's date set for February 22nd with payment due by the 17th.

I will still be available for private sessions reserved on other days. This price is not effective for those. Please contact me for contracted sessions.

Ah, yes… I did hint there would be a surprise. So here it is. I will be giving away a session every month, starting in February on the Saturday shoot. All you have to do is enter to win.

How do you enter? Follow this blog and comment in below that you are doing so. (+1) "Like" me on Facebook and comment here to let me know. (+1) And you can earn up to five more entries by referring a friend, they have to say they were sent here by you.

2014 brings about change for me. I will be entering the workforce for the first time in nine years. I will also be beginning the journey to get my master’s degree in Corporate Communications.

I also have a couple of projects that I hope to work on this year and possibly publish.

This does not mean that I will be ignoring my photography. I want to develop that aspect of my creative side also.

I anticipate delving into writing a lot more. I believe it will be more so the professional aspect. I am able to develop many professional documents and I hope to finally finish my novel that has been getting pushed back the last couple years.

I for one am excited about 2014 and cannot wait to get it under way!
Posted by Faith No comments:
Email ThisBlogThis!Share to TwitterShare to FacebookShare to Pinterest
Labels: College, New Year, Photography, Reality, Writing
Newer Posts Older Posts Home
Subscribe to: Posts (Atom)