But more importantly, you only have today and tomorrow to get in on the mini-photo session deal that is explained in this post. For examples of my work, you can see in this post. 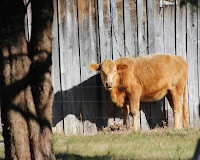 We survived the icepocalypse! Yes, even the neighbors cow Bessie. She was in the comfort of her barn before the ice came in. I just wanted to share the picture because she is quite photogenic. (Also note, I take pictures of more than just humans.)

I could be sharing the horrific damage done to our willow trees and the area around us, but I can not stomach looking at those pictures right now. Instead I want to focus on the beauty. The next two pictures are from our cherry tree at different stages of ice coverage during the weekend.

The first night we weren't sure how bad the ice was going to be. I had lived through the ice storm of February '94 in the middle Tennessee area and my husband is from Ohio, so we knew it could get ugly fast. First thing I did was charge up my phone and camera.  (Not really, but I did have to be prepared.)

We hunkered down for the night. Friday I had an assignment due for a class that had to get turned in despite the weather. We turned up the hit and kept warm.

Saturday was a surprise. We had gotten ice Friday night but not as bad as it could have been. We mistakenly thought we had missed the worst of it.

Most of the day on Saturday it was dry, cold but dry. We managed to get a few things done and took a few pictures. I managed to take one of my favorite in my front yard. (to the left) As the night neared it started raining, just a drizzle but enough to know what was to come was not going to be good. When the pastor called to cancel church, we knew it was going to be rough.

After having a movie night watching Red 2, we all went to bed not thinking about the on coming storm. (do you see what I did there, not unless you are a whovian.) Anyhow, what we woke up to was shocking. Apparently it was a freezing thunderstorm with high winds.


The trees were twisted and ripped apart. When I saw it my heart sunk. We moved to this house six years ago and had to nurse these willows back to health, to see them destroyed like this overnight guts you. 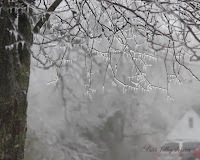 On top of that branches broke off of the bigger tree (Yes, bigger, like 50 foot tall.) and they landed on and around the kids swing-set/fort. We don't think there is any damage, but haven't been able to take care of the branches yet.


We do take heart in we are extremely blessed. the bigger willow stands above the house and none of the branches hit the house. We also did not lose power other than a few flickers here and there. As of the time I am writing this there are more than 3500 people in my county that have not had power since Sunday morning around 5 a.m. 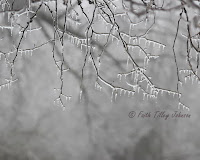 We did find ourselves having to run to the store yesterday for milk and a couple other things, we were blessed that the store was stocked. We are blessed that I did not have to be on campus today since the kids were out of school. God is good!

Now, on to knock out the rest of these finals and graduate.

P.S. Don't forget about the photo mini-sessions! The special is only available until tomorrow!