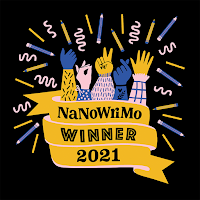 Today is the last day of NaNoWriMo and sadly I did not finish the project I started on. I have worked on it though and I have direction with it. When the writer's block struck I switched over to working on the fiction writing.

I have completed a good skeleton with the main story and developing some of the characters. I have also worked on another project that involves LOTS of typing.

The word count is on pointe, just not on one project. This is where I sit back and ponder if I accomplished what I wanted. The answer is yes and no. I wrote every day and have gotten further than I was. Unfortunately I did not finish the project I wanted to at least have in draft. I am not disappointed in writing over 55,000 words this month though.

In other news, I mostly took the holiday weekend off from the socials to enjoy some family time and to read a book that I was really looking forward to be released last Tuesday. I am only about 60% of the way done with said book so, I am not going to speak on it as of now.

We had a nice Thanksgiving, it was a quiet one. Our annual bonfire will have to wait though because it rained. Adaption. When life presents different than you plan you adapt. (Not to mention, I have learned my plans are often the wrong plans. 😉) 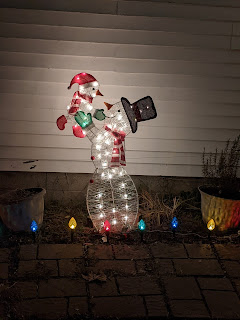 We did decorate this past weekend. I believe it is the most we've done in a few years. I still have the tree inside to put up. My favorite of the lights we put up is a snowman. If you know me, you know my love for snowmen. I am told it is because I was born during a blizzard that I have an unhealthy love for snow. I believe it is only looked at as unhealthy because I live in the south. 😅

Anyhow, I have snowmen in my decorations because I understand that having the amount of snow I crave in middle Tennessee just is not going to happen and even if it did, it probably would not be good.

Wrapping up, congratulations to everyone that completed NaNoWriMo, that participated in NaNo, that developed the daily writing habit, or was just along for the ride. 😆