Guys, I am so VERY excited to share this. I mean, over the moon excited! 🌝

Whitstead Harvestide is the second anthology in the series. It is an amazing collection of stories that cross several genres.  I may be partial as I have worked with this amazing group for the last couple of months. My new short story "Falling Through" is featured in this book. (Yes, I am a COMPLETE fangirl here. You all must get a copy of this book and read it.) 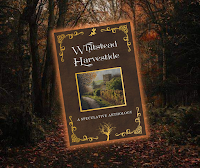 Darkness slips over the village of Whitstead as the harvest season comes. Evil forces are on the move, threatening not only the town as a whole but individual hearts and minds. As All Hallows' Eve approaches, the veil between worlds begins to thin, and demons, vampires, dangerous fae, and madmen are not the only threat—spirits and ghosts loom near as well.

The barriers of time are crossed. Love is lost, won, and threatened. An exiled heir seeks audience with dragons. An ancient guardian faces his most dangerous challenge yet. Aliens seek lost equipment. A ghost must face unfinished business to find peace. A mother searches desperately for her lost daughter. A fawn faces defeat, and a terrible quest. The autumn queen of the faeries visits an old friend… And a cowardly boy must learn the power and courage of song.

Sacrifice and redemption. The value of children. Injustices confronted and overcome. Despair in the face of loss and the light of hope. The chill of the season and ultimate peace despite adversity as bounty and wonder touch Whitstead in autumn. 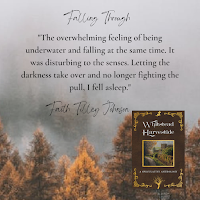 This short story is inspired by a series that I am working on.

Chenoa Damhsóir is a young woman with a unique ability, only that ability sometimes (okay nearly always) occurs unexpectantly. In "Falling Through" we will see her appear in a place that leaves her in a position where she does not know anyone.

The inspiration for the series that this belongs to is complicated. 😅 It is difficult to share some of the inspiration without giving away spoilers. 😉 Let's see what I can do though.

I have always been fascinated with the Cherokee peoples of Appalachia. My family has connections to the area as well and as muddled as our family history is, there are stories. A couple years ago I was looking into some history of the area and discovered the Du'Hare clan that had settled in the Carolinas.

The Du'Hare were large people. The chieftain or "king" was estimated to be 8'2" and his wife was right up there as well. They were not dark-skinned, in fact, they were ruddy and tended to have red or auburn hair. Based on the clan name, it is believed that there is an Irish connection. Based on the tools and location, there are hints of Viking ancestry. (Why am I explaining all of this when it is conjecture? Because it feeds into my inspiration.)

Anyhow... I will share more on the inspiration after you all purchase Whitstead Harvestide and read Falling Through. Come back here and ask questions, let me know how much you loved it, hated it, or were left wanting/needing more.